For investors, biodiversity loss represents a risk to investment returns. For instance, companies which harm biodiversity through their activities will likely have to take on the punitive costs imposed on them because of their practices which harm the environment. In addition, firms which rely on biodiversity - food, materials, medicines - for their success will see their options and opportunities diminished.

AXA Investment Managers believes the unprecedented destruction of natural ecosystems to be an environmental concern, on a par to global warming. There is also a close link between biodiversity loss and climate change, with the former feared to be accelerating the latter. Biodiversity loss has been placed - alongside climate change, gender diversity, public health and data privacy - to be a sustainability theme meriting our utmost attention and in-depth focus.

However, we believe this not yet a lost cause. Investors can play an important role alongside other stakeholders in finding solutions to the crisis. This can be done through allocating investment capital to companies and projects which can help resolve the biodiversity loss crisis. There is also a role for investors to engage with investee companies, to acknowledge this issue and to provide answers.

Below we outline our framework for assessing biodiversity risk from a long-term investor’s perspective. We also introduce our engagement approach, which we will carry out through 2019 and onwards. This initiative seeks to build on the recommendations aimed at investors in the WWF/AXA report.

WWF and AXA Into the Wild Report

During May 2019’s G7 Environment Ministers meeting, AXA Group and environmental non-for-profit organisation the World Wildlife Fund for Nature (WWF) published a report which called for action from societal stakeholders to recognise the degradation of nature as global environmental crisis. The report made the following five key recommendations:

The recently released draft report by the UN Intergovernmental Science-Policy Platform on Biodiversity and Ecosystem Services (IPBES) makes for sobering reading. It provides ample evidence that the so-called Holocene extinction (named after the current epoch) is unprecedented and is a result of human activity. In the post-war era, populations have modified ecosystems faster and more profoundly than in any other period of humanity. The IPBES 2018 report found that only a quarter of the land mass on the planet is unaffected by human activities, and this proportion could plummet to 10% in 2050.

60% of mammals, birds, fish and reptiles wiped out by humanity since 1970

1,000 times faster extinction rate than the average of the past 10 million years

The Stockholm Resilience Centre’s concept of ‘Planetary Boundaries’ is an effective model to illustrate what biodiversity loss means to humanity. In the decade-long study, researchers studied Earth’s natural tipping points – beyond which there was a high risk of no recovery. The framework – in the chart below - is based on nine critical environmental processes that influence the healthy functioning of the biosphere. On each of these nine processes, the framework aims to determine levels of anthropogenic perturbations, below which the risk of destabilisation of the Earth system is likely to remain low. Two of the Planetary Boundaries are considered as “core”, because of their fundamental importance for the biosphere: climate change and biosphere integrity. The conclusion is that the genetic diversity of the planet is at high risk and the future is uncertain.

Figure 1: The nine planetary boundaries within which humanity can continue to develop and thrive for generations to come 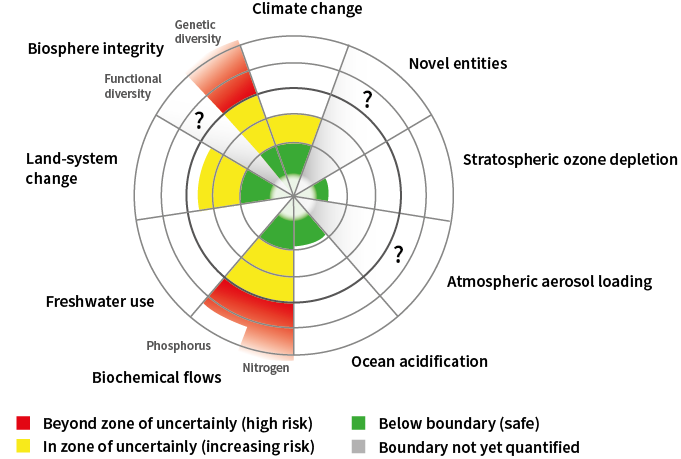 Three quarters of all the plant, amphibian, reptile, bird and mammal species have become extinct due to overexploitation beyond the natural recovery rate of ecosystems and the cultivation of agriculture (Maxwell et al., 2016). Production of food, fodder, fibre and fuel crops, livestock farming, aquaculture, and the planting of trees represent the main agricultural threats. Urban development, trade-related activities, invasive species, industrial pollution, system perturbations and global warming are additional sources of pressure.

Drivers of biodiversity loss are multiple and complex. They range from the impact of local traffic, to industrial and agricultural activities - all of which lead to land degradation, pollution and destruction of ecosystems - through to global drivers such as climate change. 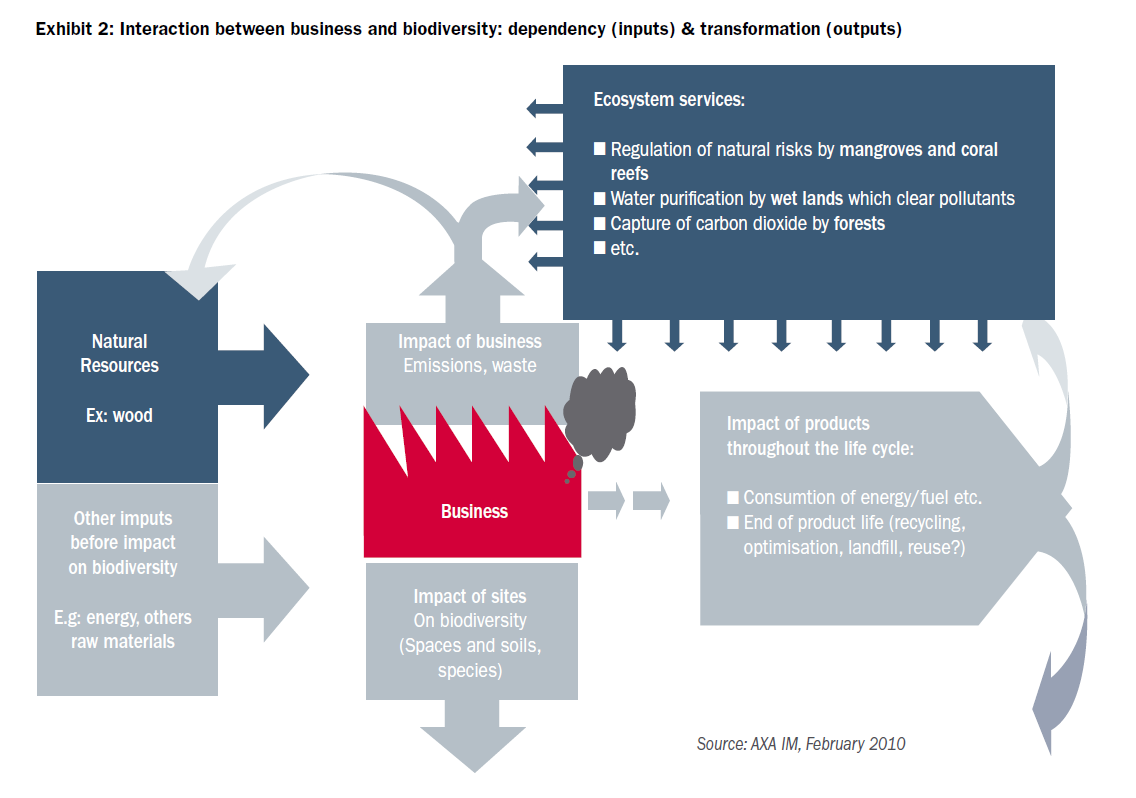 Business’s impact on nature and the impact of nature on these businesses widely depends on where they are based. For example, the main biodiversity pressures in intertropical areas include illegal hunting and deforestation. Elsewhere, biodiversity loss is driven by intensive agricultural activity and its negative impact on insects and bird stocks through the pollution it generates. In addition, while half of all medicines come from plants and other natural elements, across emerging countries 80% of the population rely on traditional plant-based medicines2.

“Biodiversity means biological diversity at several scales. It concerns all living organisms, from bacteria to whales, not forgetting plants. The first scale is genetic: we talk about genetic variety within a single species. The second is species diversity within an ecosystem. Finally, this term covers the diversity of these ecosystems and their interactions. With this schema in mind, we can more easily understand the fragility of the balances that determine biodiversity.”

Why biodiversity risk matters for investors

The loss of biodiversity affects the businesses we invest in, and all economic activity ultimately depends on services provided by nature. Depleted ecosystem services will impact financial returns, as activities which rely on them become less profitable.

Investors are exposed to financial risk stemming from potential disruption of an investee’s operations, resulting from environmental problems. Investees’ failure to address environmental issues will jeopardise business operations and therefore potentially represent an investment risk for the investors supporting these companies.

Most businesses are biodiversity dependent

Most businesses depend on biodiversity, either directly or through their supply chains. The value of resources and services provided by nature is estimated to be US$125trn a year, according to a 2014 study.3 Resources include water and clean air. Services include pollination and flood control. Considering that world GDP – the value of economic activity by humans - is US$80trn a year, the global economy is therefore heavily reliant on nature.

Replacing lost natural services can be impossible or very expensive. For example, the Journal of Ecological Economics estimated that labour and technological costs of artificial pollination would represent €153bn4. This exceeds any economic viability.

Governments, business and the finance sector are starting to question how global environmental risks such as increasing pressure on agricultural land, soil degradation, water stress and extreme weather events, will affect the macroeconomic performance of countries, sectors and financial markets.

An asset manager has little direct impact on nature, but it nevertheless has an indirect impact through its investments. There is increasing external stakeholder scrutiny of the companies in which asset managers are invested and how these firms impact the environment in terms of natural capital and biodiversity. This focus, however, is not limited to the possible negative externalities of a group’s activities but also on how legal, regulatory and reputational issues the investee company encounters are assessed.

SDGs: Biodiversity is a critical component

The conservation and improvement of biodiversity enhances the capacity of an ecosystem to provide the resources and services people depend on. Protecting biodiversity is an important bedrock in helping achieve the UN’s Sustainable Development Goals (SDGs). The graph below, developed by the Netherlands Environmental Assessment Agency (PBL), illustrates how the three SDGs linked to the natural resource base are at the basis of other SDGs linked to production and consumption as well as well-being. Avoiding, reducing and reversing land degradation has been identified as essential in reaching the majority of the SDGs, and would deliver benefits for nearly all of them.

Figure 2: The SGDs and the neutral resource base 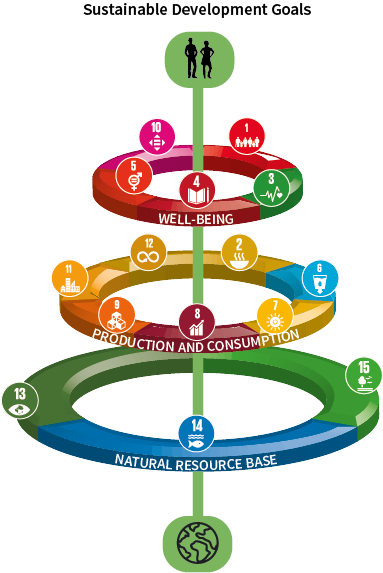 Methodologies and tools used to measure investors’ biodiversity footprint are under development. These are more complex than measuring a carbon footprint. There are many difficulties in creating generally accepted approaches to measuring biodiversity performance, including the intricacies of biodiversity itself, and the complexity of the cause-and-effect relationships between the activities of organisations and natural environments. While some tools are emerging to help financial institutions map which sectors are particularly at risk - both on the impact and dependency sides - we believe it will take time to identify how our investments depend on or impact biodiversity.

Research is key to better understand and assess biodiversity degradation and its related risks to the ecosystems on which humanity relies. Through the AXA Research Fund, AXA is committed to fund research projects worldwide and to promote their findings.

For example, the AXA Research Fund supported Dr. Kelvin Peh, Doctor of Physical Geography and currently working at the University of Southampton, who developed a toolkit named TESSA (“Toolkit for Ecosystem Service Site-based Assessment”). TESSA enables local non-governmental organizations or local communities to assess the monetary value of services offered by local ecosystems and their sensitivity to land-use change. While there is a broad range of ecosystem assessment tools, TESSA is low cost and specific in that it allows users to collect data on the ground. Therefore, it is particularly valuable in developing countries where data is scarce, and NGOs have limited resources.

The full list of projects and publications are available on the website of the AXA Research Fund.

AXA IM is set to start a biodiversity engagement programme with investee companies across several sectors, to better understand how such firms take this issue into account.

[3] Changes in the global value of ecosystem services, Costanza et. al in 2014

Not for Retail distribution: This document is intended exclusively for Professional, Institutional, Qualified or Wholesale Clients / Investors only, as defined by applicable local laws and regulation. Circulation must be restricted accordingly.

This document is for informational purposes only and does not constitute investment research or financial analysis relating to transactions in financial instruments as per MIF Directive (2014/65/EU), nor does it constitute on the part of AXA Investment Managers or its affiliated companies an offer to buy or sell any investments, products or services, and should not be considered as solicitation or investment, legal or tax advice, a recommendation for an investment strategy or a personalized recommendation to buy or sell securities. Past performance is not a guide to current or future performance, and any performance or return data displayed does not take into account commissions and costs incurred when issuing or redeeming units. References to league tables and awards are not an indicator of future performance or places in league tables or awards and should not be construed as an endorsement of any AXA IM company or their products or services. Please refer to the websites of the sponsors/ issuers for information regarding the criteria on which the awards/ratings are based. The value of investments, and the income from them, can fall as well as rise and investors may not get back the amount originally invested. Exchange-rate fluctuations may also affect the value of their investment. Due to this and the initial charge that is usually made, an investment is not usually suitable as a short term holding. Due to its simplification, this document is partial and opinions, estimates and forecasts herein are subjective and subject to change without notice. There is no guarantee forecasts made will come to pass. Data, figures, declarations, analysis, predictions and other information in this document is provided based on our state of knowledge at the time of creation of this document. Whilst every care is taken, no representation or warranty (including liability towards third parties), express or implied, is made as to the accuracy, reliability or completeness of the information contained herein. Reliance upon information in this material is at the sole discretion of the recipient. This material does not contain sufficient information to support an investment decision. Issued in the UK by AXA Investment Managers UK Limited, which is authorised and regulated by the Financial Conduct Authority in the UK. Registered in England and Wales No: 01431068. Registered Office: 7 Newgate Street, London EC1A 7NX. In other jurisdictions, this document is issued by AXA Investment Managers SA’s affiliates in those countries. Design & Production : Internal Design Agency (IDA) | 00000 08/2019| 27-10428 - Photos: gettyimages